When I was a kid, eagerly awaiting the new episodes of “Welcome Back Kotter”, “Different Strokes” or “Happy Days”, I remember being thoroughly annoyed whenever an airing of the “Billy Graham Crusades” would interrupt my prime time television shows.
Then, in my late 30’s, as God began to bring me to repentance and placed in my heart a desire to know Jesus Christ, I found myself looking forward to the Wednesday night re-runs of those same messages from Billy Graham which I had rejected all those years ago.

Although most of my life has been dedicated to creating artwork, during this period when God began working on me, I had not painted or drawn in quite awhile. The first moment I had felt inspired to put pencil to paper was to reproduce a famous photograph of Billy Graham praying. I was, and still am, awed by the intensity of his inner dialogue with The Lord. He is standing in the midst of thousands of people, yet in this moment, it was just him and His Father in Heaven. 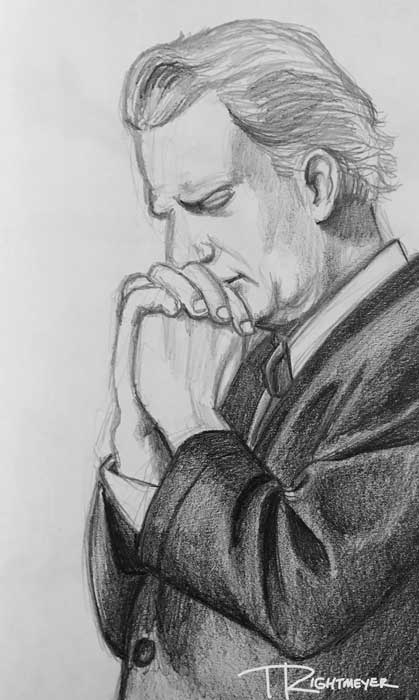 I was inspired by Graham once again a few months ago.
While visiting family in Charlotte, I happened to notice that the Billy Graham Library was just a few minutes away and thankfully had the time to spend a couple of hours at there.
I took many photographs, but the one that captured my attention was this image of Graham’s preaching Bible. At the bottom right corner, underlined in red, are the words of John Baptist as he spoke about Jesus: “He must increase, but I must decrease.”

That is the struggle of each person who follows Jesus, especially those who are called to preach the Gospel. Billy Graham was just a man, a sinner, no better or worse than anyone else and he was raised up by God to be a spokesman to the world.
Being in the spotlight for so many years and viewed by many as a spiritual leader, I’m sure he struggled with pride, ego, and the exaltation of self. Still, I saw a man whose life was dedicated to increasing the kingdom of God by obeying the call to preach repentance and faith to a lost and dying world. I saw a man who knew that “Jesus must increase, but Billy Graham must decrease.”

For the sake of this world which is perishing around us, we who have been saved by God’s grace through faith in His Son need to follow Graham’s example.

I thank God for bringing Billy Graham into my life again, for opening my heart and mind to listen and giving me ears to hear.
I look forward to seeing him in the kingdom one day.

Travis Rightmeyer, is a follower of Jesus Christ, artist, and writer from Virginia Beach, Virginia.